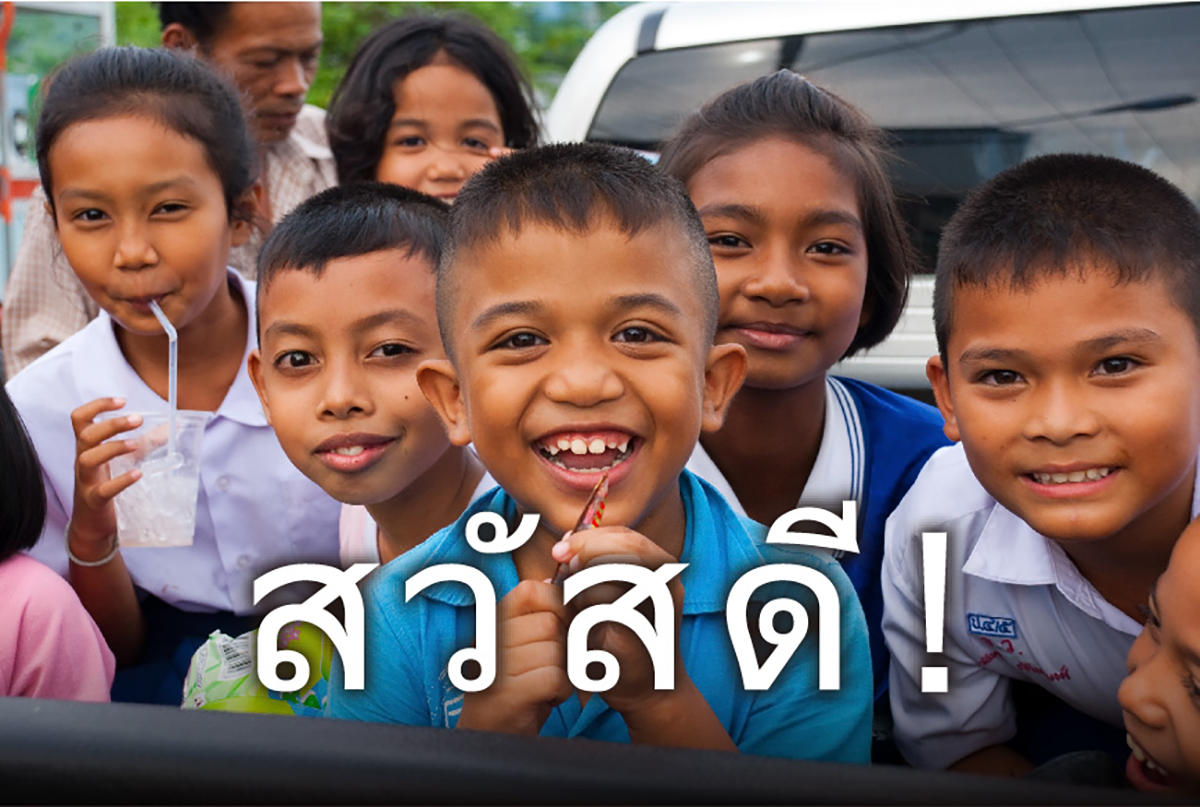 That's right! Just like Japanese, "hello" in Thai is often the first thing you hear in Thailand!
Thailand is a country located at the heart of Southeast Asia and is connected to Myanmar, Laos, Cambodia, and Malaysia.
The people of Thailand are friendly and gentle, while its abundant travel resources have attracted visitors from across the world.

Thai cultural include a variety of traditions such as the Songkran Water Festival, Phra Phrom (Four-Faced Buddha), elephant rides, and cabaret shows. Whether you’ve been to Thailand before, today's DynaFont Story will take you on an in-depth tour of the foundation of Thai culture: Thai characters.

Instant Comprehension of the Thai language

Before we start introducing Thai characters, let's talk about spoken Thai!
Just like the honorific and normal suffixes in Japanese, Thai is also separated into different categories.
Due to a long history of social class systems, there is also “Common” and “Elegant” Thai. Most people use common Thai for daily communication, while elegant Thai is used by aristocracy, literati, or monks when studying scripture.

The difference lies in the syllables.
Thai vowels have long and short sounds, in addition to retroflex, flap, and linking sounds. You will be able to speak fluent common Thai as long as you've mastered simple monosyllables, a lot easier than elegant Thai!

Let's talk about some facts that even native Thai people might not know about.
When Buddhism reached Thailand thousands of years ago, the main languages used for spreading the religion were Sanskrit and Pali. Therefore, the Indian language had a great effect on surrounding countries including Thailand. More than 60% of the Thai language contains ancient Hindi!

Here comes the introduction to Thai!
Reportedly, Thai characters were created by King Ram Khamhaeng in 1283 based on Khmer. After undergoing constant transformation, the Thai language used today contains 42 consonants, 32 vowels, and 5 tones. It includes over 70 letters and can form a relatively large amount of sounds and words.
Also, since Thai is made up of phonetic alphabets, the writing of Thai is from left to right in a horizontal manner. Thai is also different from English, which contains uppercase and lowercase letters, and does not require punctuation.

Below are a few Thai words:

Apart from traditional Thai fonts, there is also modern Thai, which is frequently used in signboards and articles titles. The design of modern Thai is sleek, omitting the loop structure of traditional Thai. Modern Thai has an appearance similar to Latin and is suitable for foreign language signboards. 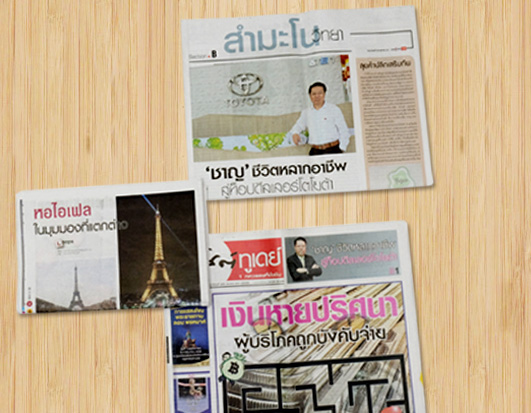 ▲Modern Thai is frequently seen in newspapers and magazines

The design focus of Thai characters lies in developing a new set of fonts that has high recognizability and does not distort when viewed on small screens. During the design process, various visual alterations were applied in the stage setting of fonts, the curves of brushstrokes, and loop structure. The arrangement of vowel spaces was also designed for a more comfortable reading experience. 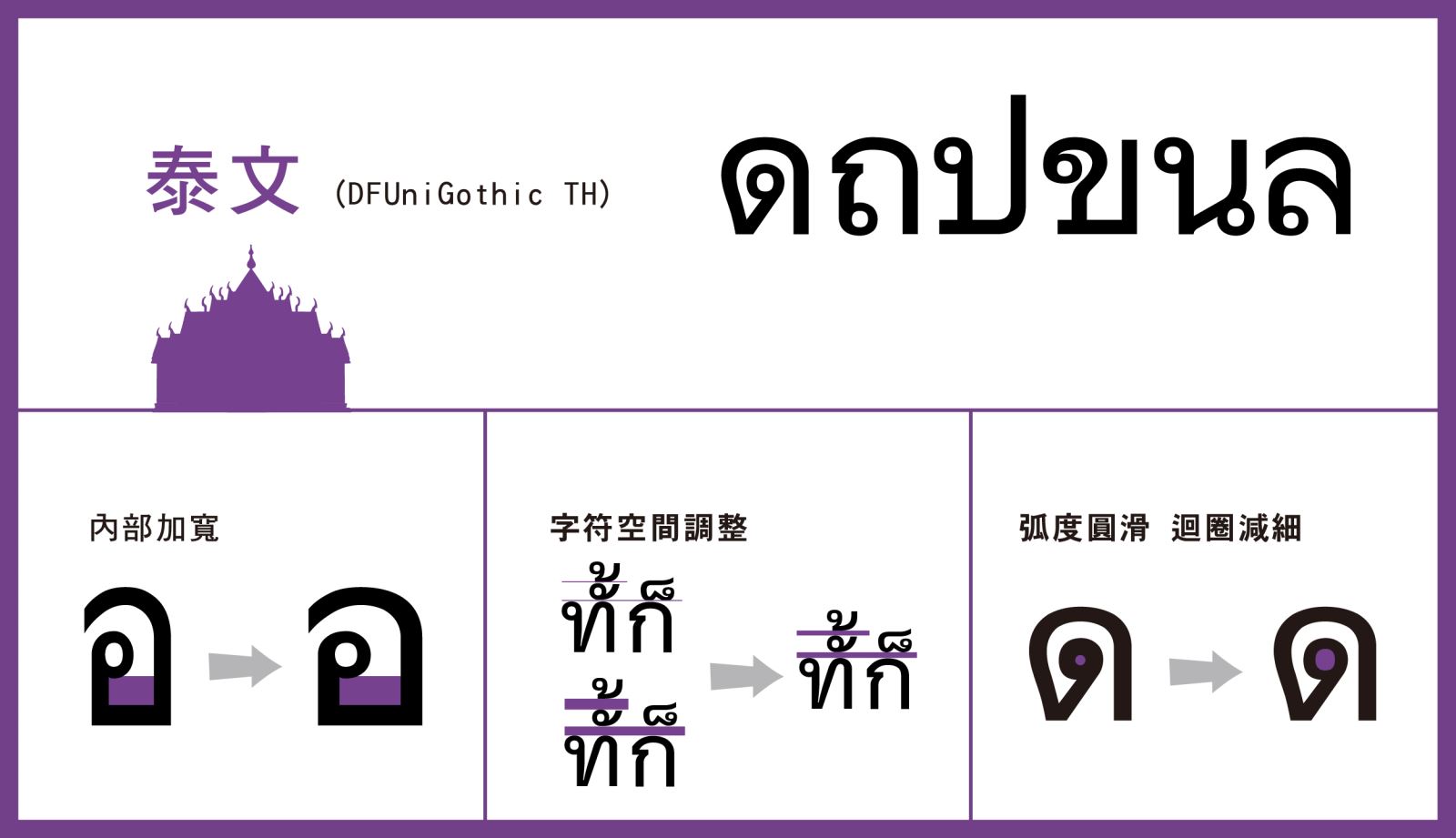 A Message from the font designer

★For East-Asia, Thailand is a country located between the south of China and the east of India, the heart of Indochina. Its geographical location decided its culture. Inheriting the culture of nearby countries, the convenience of navigation allowed the Indian culture from the west to spread to Thailand seven or eight centuries ago. Until today, traces of Indian culture can still be seen in almost all aspects of life, from traditional food, clothing, living, transport, New Year, marriage ceremonies, to political policies, religion, and life philosophy. Moreover, more than two-thirds of names of local provinces are in Sanskrit or Pali. Over half of the words in the Thai language are from Sanskrit and Pali. However, for the sake of convenient pronunciation, the last one or two syllables are usually bypassed, while the complete words are preserved in writing.
★The most impressive aspect of Thailand is their Buddhist culture. With centuries of ongoing history, from King Ram Khamhaeng who created Thai words onward, each emperor of the kingdom had to temporarily become a Buddhist monk. With the support and protection from the royal family, temples and monks scatter to the deep corners of the country, creating an inseparable bond with the everyday lives of the people. The tradition of honoring Buddhism is deeply rooted in the hearts of the Thai people.

The UniGothic font (Thai) introduced in this article is specially designed for screens on smart phones and electronic home appliances. Embedded type services are available.